What are our basic needs?

Abraham Maslow created a hierarchy that later researchers have refuted.

The upshot is that design may be far more important than food, shelter or sex. Indeed. 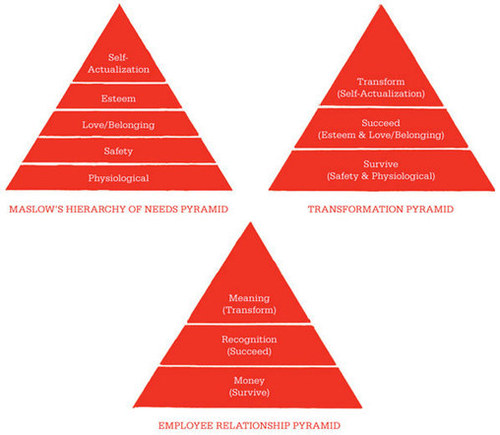 Why are we still talking about Maslow whose motivation theories were refuted years ago?

This by his very own Harvard student among others: see David McClelland: “Power is the Great Motivator” Harvard Business Review.

Look, you have to give credit to Maslow for trying to organize Freud into some kind of system, but otherwise there’s not much there. Just before World War II, McClelland set out to prove Maslow right. He and his researchers boarded a navy sub. They proceeded to withhold all food, while encouraging the submariners to draw pictures on their napkins. On the first day some steaming hamburgers appeared, but on following days to the researchers chagrin, the navy guys seemed to have forgotten all about food. What happened to Maslow’s subsistence motive?

McClelland tried to explain away this awkward fact as a glitch in the study. The navy men must have known deep down that the navy would never actually starve them to death. So he and his team went off to find people were actually starving to death: Appalachia, refugee camps, I’m not sure where else.

In any case, turns out Maslow’s motives had absolutely no bearing on the motives they found in their research. Only about 5% of the starving woke up thinking about food (and they were nominally a bit heavier). The remainder broke down into three groups: the group motivated by their relationship to family and friends (how can I help them?), the group motivated by a sense of personal achievement (I am going to make my tent the nicest in the camp), and a much smaller group motivated by what McClelland called power, or influence (how can I get everyone in the camp to work together for better conditions?).

Chip, you must have

I think I would come away less confused by your references to Maslow if you could tell me why you would choose one over the other.